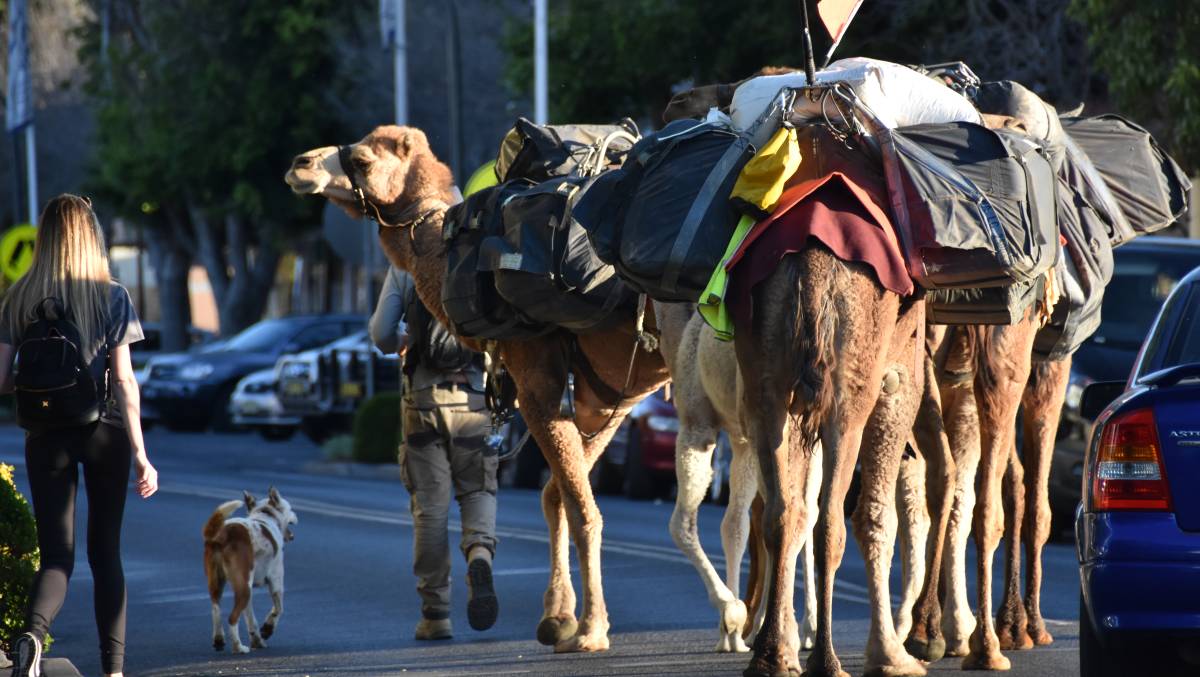 It was hump day in Moree on Wednesday, literally.

Workers and shoppers in Moree's CBD were treated to an unusual site on Wednesday afternoon, as five camels and a dog made their way down Balo Street, slowing traffic and creating quite the stir.

The spectacle was camelier John Elliot's way of celebrating reaching the 1000km mark on his two-year trek around Australia.

"I'll always remember Moree as the 1000km mark. So we did a 'mainy' lap down the main street to celebrate."

A few years ago, John was a highly successful businessman, living a picture-perfect life that many would dream of.

One day, he Googled, 'how to buy a camel in Australia'. And that's exactly what he did.

He gave away nearly all of his possessions, including his dream car, and the life he knew to spend a year training camels. And in April this year he set off on a two-year trek around Australia with his four camels Ted, Jackson, Arthur and Bill and his rescue dog Bruski.

John's story is one that many just can't understand.

"Everyone asks why," he said.

"They assume there must have been a loss of some kind. I was really enjoying life back home but as much as I was happy I didn't want this one chapter to be the whole book."

John did almost lose everything once though. He went from the verge of bankruptcy and an attempt on his own life to building a successful insurance brokerage. But he stood down as CEO to hit the road.

"People didn't know what to think," he said.

"There was all these crazy rumours. When I started I didn't have a why; it was a blank canvas. I had no expectations.

"What concerns me the most now is if I would even want to go back. Only 400km into my trip I decided to add another 2000."

After spending 15 months training and preparing, John travelled to Coonarr Beach, south of Bundaberg, to start his journey on April 11.

"It was going to be a 'small' trip across to WA but I didn't want to do all that work for three months," he said.

The journey has evolved to now wanting to be the first camel trek to hit every state, including Tasmania. The trip is expected to take two years with John walking about 20km each day.

For every day he walks, John includes a rest day.

It's these rest days that have allowed him to experience what Australia truly has to offer.

"About seven kilometres out of [Goondiwindi] two blokes pulled up for a chat and asked if I wanted a beer," he said.

"It was two days before I left. They helped me with some maintenance and repairs, and that's the kind of hospitality I have received. I've had four roast dinners and slept in 100-year-old shearers' quarters. When I left I didn't know a person and now, this has really opened the road up for us."

On his way to Moree from Goondiwindi (travelling the back roads), John took a detour down a driveway which turned out to be "the best 2km detour I took of the trip so far".

"I hit the plains on those really windy days, it was probably one of the worst times to cross the plains," he said.

"I saw a 2km driveway in front of me and what looked like a couple of sheds at the end that I thought I could seek shelter in from the wind."

As it turned out, that 2km driveway belonged to Andrew and Jodie Crowe, who not only set him up in one of their sheds, but let him soak in their artesian bore bath and Andrew even took John up in his plane to show him the area and where he'd walked from the sky.

"I've been really looked after along the way," he said.

"I spent four days with the Crowes. Sometimes it might take a little longer but I've got to take full advantage of those experiences."

John said it's this type of hospitality that has opened his eyes to the generosity of people.

"People drop off food and beer ... every 10th car stops and they'll have a chocolate bar or a bottle of water that they'll give me," he said.

"You come out here and you really see the generosity. Irrelevant of whether people have or don't have, all I'm seeing is what people are prepared to give."

Along the way, John also managed to acquire a fifth camel - a baby only about a year old - from Peter Gor's property just south of Goondiwindi.

"I saw him in the paddock and Pete said if you can catch him, you can have him," he said.

"After a few days I caught him and it took two days to train him up and he joined the pack."

The baby camel is yet to be named, but John said that'll come once his personality starts to come through, having only had him for two weeks.

"All my other camels have pretty generic names, so I was going to call him something crazy like Cocaine because he's white, but after talking to a few coppers the other day, they said it probably wasn't the best idea to go around saying I smuggled Cocaine across Australia," he laughed.

John has everything he needs for life on the road - camping gear, solar, electricity, a fridge, hunting gear, food and water - all of which is carried on the back of his camels, which can carry up to 200kg of supplies each.

At any one time he has up to 300L of water and up to three months' worth of food, "so technically I don't really need to go through towns".

"I come into towns for the people and beer," he said.

Proving he's not afraid to rough it, John admitted he ate road kill for the first time on his way to Moree.

"Someone said to me, I'm trading a five-star lifestyle for a five-billion-star adventure," he said.

"I've got to be open to trying all these things."

I'm trading a five-star lifestyle for a five-billion-star adventure.

And he says, he wouldn't trade this adventure for his old life.

"When I have a hard day, sometimes I think, 'what the hell am I doing?' he said.

"But I never think, 'I wish I was back'. I have moments of doubt, when people say 'you're crazy', but I think spending a few hours a day in peak-hour traffic and eight hours in front of a computer screen is pretty crazy. I'm smiling more than I'm not."

Before John's journey had even begun, the adventure was already life-changing.

"Before I left and I went and got my first ever skin check and they found a large melanoma on my back," he said.

"If it wasn't for this trip, I never would have got it checked. Who knows what could have happened."

This then gave John another purpose. He is now using the trek as a way to raise funds for Beard Season. They have so far raised more than $26,000 and wants money to go towards free skin checks in regional areas.

John is currently spending a few days resting with his camels and Bruski at Moree Showgrounds.

He will be in Moree until at least Sunday, and invites the community to come down to the showgrounds to say hello and get up close and personal with the camels.

"People can come down with carrots, apples or sweet potatoes and they'll come up to the fence, even if I'm not here," he said.

"Coming into drought areas, a lot of the conversation is about rain and drought, so this is a bit of a distraction and something else to talk about."

From Moree, John will head to Narrabri before making his way down to Canberra and Victoria, from which he'll loop around and stay on the eastern side of the Flinders Ranges, heading to the centre of Australia and back across to Western Australia.

You can follow his journey through social media or at johnelliot.com.au