Frustrated families have called for a nationally-recognised set of guidelines to assist boarding school students crossing state borders during the pandemic.

As many parents in NSW begin to bring their boarding school children home from Queensland for the school holidays, families remain in limbo with no clear directives.

Phoebe Watts, who is president of the Isolated Children's Parents' Association of NSW branch at Moree, in northern NSW, says with children now in their final days of schooling for this term, there was no clear direction of what is or isn't allowed.

"It's really difficult for parents to try and work it out," she said. "Most kids are being picked up today and tomorrow so if things change on us again after we have crossed back into NSW, we'll be stuck in another situation. We're just very unsure still."

Mrs Watts said going back to 2020, there were no problems.

"Last year people outside the border bubble were allowed to sign a stat dec to get back into QLD and that was satisfactory for QLD Health. This year they're not allowing that, so that's what we need to push for."

ICPA NSW State Councillor, Kate Warby, said they had put forward to the government that they revert back to what worked in 2020 using statutory declarations, risk management plans and travel diaries.

She said schools wanted to offer sterile travel corridors to bring students home and then back, but "it was a blatant no from the CHO".

Mrs Warby with the ICPA state council, called for the urgent introduction of one document, being a boarding school 'code' for students crossing borders.

"That is imperative; we need it!"

"It has been agreed in principle by the Australian Health Protection Principal Committee to come on board and write a code/guidelines. Everything is sitting on the tables of state health and education ministers, we are just unsure when this is going to come into play," Mrs Warby said.

"We just need a concise set of consistent guidelines that will apply to every state and territory in the country."

At this point, NSW is divided into three areas which includes two border zones, and then the remainder of the state.

There is the non-restricted border zone which includes the 12 local government areas in the 'bubble' bordering the NSW/QLD state line. For those in this zone, students are able to travel home and return to QLD without the need to quarantine.

However, that is on the proviso there are no cases or positive sewage tests in their LGA during that time. They cannot leave their zone, or have visitors from outside that zone.

Then there is the restricted border zone which includes Bourke and Walgett. Students visiting home in those LGAs, must quarantine upon their return to QLD via private arrangements or if the schools are able, in their facility for 14 days but with no school and no activities.

There are strict conditions including that isolation must be completed in a freestanding dwelling with no common areas. There will also be no daily exercise allowed and people will not be permitted to leave for any reason - including to get a vaccination - other than to have a COVID test if they become unwell.

This comes at a huge cost to families who are also facing difficulties to find suitable accommodation. 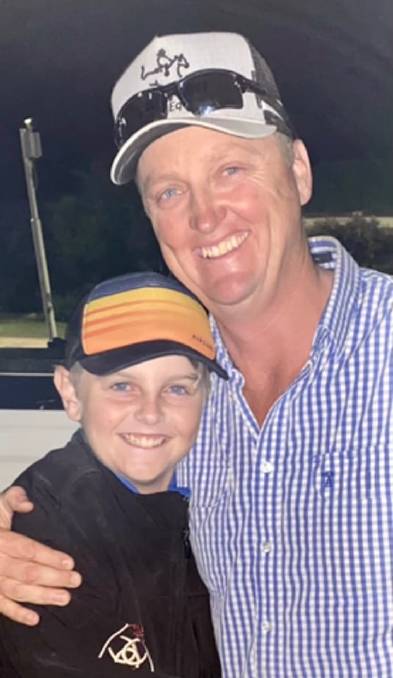 Riley and Peter Stevenson of Tamworth.

Anna Stevenson, whose farm is based outside the border zones at Tamworth, said it was not an option for their family to quarantine.

"We already have a second rental home in Armidale where we have a daughter finishing Year 12. To be able to afford a second rental for a fortnight to quarantine, it's not an option for our family," she said.

"And the time off work is not an option."

They will keep their 13-year-old son home upon his return.

"We will homeschool him ourselves. It is a much more viable option for our family," Mrs Stevenson said. "We haven't seen him since last school holidays. That's 10 weeks, so the thought of doing that again next term as well... even if we did quarantine and got him back to school, would I then miss another eight weeks of seeing him?

"We hope restrictions will lift to allow him to return to school in term four but if he has to complete a term at home, so be it. It's just ridiculous that we live in a place that's COVID free, are fully vaccinated, on a 20,000ac farm. We are effectively in quarantine ourselves at home but it's not acceptable to QLD Health to cross the border outside of the bubble."

Christine McDonnell lives in the restricted border zone area of Rowena, about 100km south-west of Moree and in the Walgett Shire. She said in a year like this, it was not viable for her to be away from home during harvest.

"I think we're going to be short-staffed anyway due to the other implications around COVID so this just puts another level of strain on everything when it's coming up to the busiest time of year," Mrs McDonnell said.

She was frustrated that her community was included in the restricted zone, explaining that despite being in a locked down shire, the village and farms were isolated.

"Rowena has never had a case so we shouldn't be in the restricted zone. And there would be a lot of people in the same position, just because of their postcodes," she said. "It's not fair."

Mrs McDonnell said this year was more stressful than when they faced the same dilemma last year.

"We've got more impact with the non-movement of people in NSW. I think the other thing is, the physicality of these restrictions is extremely limiting and don't provide for any flexibility whatsoever."

"There is this continual reference to mental health and anxiety but the actual physical actions of what they are doing with this continual uncertainty, and not being able to justify their decisions backed by scientific fact, has actually led to the increase of anxiety," she said. "To me it's totally counteractive.

"You've got the Chief Medical Officer and the Premier of QLD saying it's so important for children to get back to their families but we're going to put so much stress around that fact, that they're actually driving the children into a greater degree of anxiety than if they just had clear perimeters.

"And that's the problem around all of this. There is just absolutely no clear perimeters and it's not being based on scientific fact so what's the point of getting vaccinated? If people are double vaccinated and the children are starting to get vaccinated, where is their problem?"

"We're all talking about it behind the scenes... it's a huge concern that, is it going to take a self-harm event of a young person in possibly a boarding environment for these people to wake up to themselves and go, this is real?"

Entire families are feeling the pain.

"I love helping people but it's getting to the point where I'm not a trained counsellor. I couldn't hang up from a mother who was crying her eyes out, and has been for 48 hours, after speaking with her son's boarding school in Brisbane.

The schools are not understanding the directions either because they are just so confusing. It's just a joke. It's tiring and the financial and mental health implications are proving to be huge," Mrs Warby said.