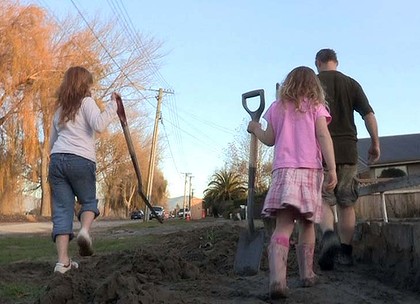 Digging in ... Gareth Cook and his daughters Cambelle and Tasman shovel mud after their property was inundated for a third time since September.

The Anglican bishop, the Right Reverend Victoria Matthews, is seeing a ''deep weariness of soul'' among Christchurch residents.

A business leader is hearing accounts of exhaustion, trauma and stress. A clinical psychologist says some people are at breaking point.

The two big aftershocks that rattled Christchurch this week - magnitude 5.5 and 6 - have heaped another layer of anxiety on to those trying to survive in the earthquake-ravaged city.

On September 4 last year, after the first big earthquake hit - a 7.1-magnitude - thousands dug in, dusted off and carried on.

The deadly February 22 quake, which killed 182, left many with no choice but to leave as houses and workplaces crumbled.

But this week, as the quakes again brought the damaged city to a standstill, opening sinkholes in roads, toppling buildings, flooding streets and bursting pipes, it was the mental pressure that was being examined.

Anxiety was at least partially to blame for the exodus of more than 10,000 school students since the February 22 quake. According to latest figures, 3660 students have returned to their Christchurch schools, but 6546 - or 8.6 per cent of the total - have not.

There were fears this week that the latest quakes would spark a renewed flight from the region. Even the Prime Minister, John Key, recognised the potential problem, calling on locals to stay if they could.

''I think the most significant damage at the moment is to the confidence of Cantabrians who really want all this to end and to feel there's some clear air to start rebuilding their city.

''We don't think it's a situation where people should give up hope in Christchurch. I haven't given up hope on Christchurch and I certainly won't be.''

The Finance Minister, Bill English, also offered his support: ''I think we're all a bit more worried about the psychological impact on the people of Christchurch than the government's budget.''

A Christchurch clinical psychologist, Richard Wheeler, said quakes might be ''too much'' for some people, who would now need professional help. He said he had seen 25 patients after previous quakes and expected to see more after Monday's tremors.

People with a history of traumatic incidents, such as an abusive childhood, were at more risk than people with no history of psychological problems.

A ''holiday from the fear'', such as two or three nights using sleeping pills or tranquillisers, could be helpful, he said, although such medication should be used under supervision.

Another psychologist, Ian de Terte, said residents should reflect on what helped them to cope during previous quakes.

He said residents would again be struggling with anxiety and nervousness because of the uncertainty. ''[This week's] earthquakes were big events and people will be wondering what is going on and when it is going to end.''

He said it would be heartbreaking to see all the progress undone by the latest quakes, and people would feel like they were back at square one.

Some might be at ''breaking point'', but their experience could help them to deal with the recent events, he said.

For one young couple, Ben Terry and Amanda Broughton, there has been no ''final straw'', but they plan to leave the city next Tuesday.

They have a house, jobs and each other. But sometimes the basics are just not enough, they said. Terry, 21, a restaurant manager, and Broughton, 23, will move to Wellington.

''There was no final straw. It wasn't an immediate decision. But everything in Christchurch has changed,'' Terry said.

At first the couple wanted to stay, but were naive about the reality of living with earthquakes.

''I thought [in September] it was a one-time event and that would be it - we would get back to normal,'' Terry said.

Nine months later, their neighbourhood is still in ruins with 19 abandoned houses in one street.

''I guess the reality really hit when I couldn't get hold of Amanda after the February one,'' he said. ''Now we feel justified in asking, 'what if it happens again?'

''And the main reason we moved to Christchurch was because of the city living. And that's not here any more - it's all suburban.'' What used to be a 20-minute drive home now takes an hour and a half.

Broughton's gym is closed. Many of their friends have left. There is no arts scene, no nightlife, nothing to do for fun.

While that might sound trivial to those who lost family, homes or jobs, Broughton said the impact of the quakes was affecting her mental state. ''I'm always on edge … when I hear a loud noise or feel an earthquake. And there's nothing to take your mind off it. There's no stress release,'' she said.

Terry said that if they stayed ''we'd be putting our lives on hold and we're not prepared to do that''.

''We would consider coming back. Christchurch has huge potential. There's going to be lots of opportunities here. But they can't do anything until it stops shaking.''

But in one street in a near-abandoned Christchurch suburb, a group of stoic neighbours are determined to stay.

The families, some of only a handful left in the silt-soaked street of Locksley Avenue in Dallington, spent this week shovelling mud from their inundated properties for the third time since September.

''Quite a few people have disappeared from further up the street - overseas, to stay with family - but we're not going anywhere,'' said a resident, Gareth Cook. ''A bunch of us families decided to stay and help each other out.''

The Cook family - Gareth, his wife Annette and daughters Cambelle, 8, and Tasman, 6 - have no water after Monday's aftershocks and have not had wastewater for ''months''.

Part of their front living room tilts alarmingly towards the ground. They use a Portaloo or chemical toilets.

They have to walk on planks resting on bricks to get to the front door, and their home is constantly at risk from the swollen Avon River.

To make matters even worse, none of the family's problems will be over until the New Zealand government decides whether the land they live on should be abandoned - a decision that could still be far away.

Gareth said the waiting and not knowing was one of the hardest things to deal with.

''There's so many questions we don't even talk about it as a family,'' he said.

''We had all had our hopes hinged on the end of May. But now it might be the end of June or July.''

The Cooks say the one thing that has kept them going is their neighbours - a stoic group of six families who have become tight-knit since the earthquakes.

''That's what we did on Monday after the aftershocks - went and had a couple of rums with the neighbours and a Thai curry,'' Annette said.

''It was already a great community but now it is even better. We know we can rely on each other.''