With more than half a million fans on TikTok and close to 200,000 followers on Instagram Morgan Hipworth is the latest viral culinary sensation.

He held his first bake sale at eight, opened the bakehouse Bistro Morgan at 15 and was a guest judge on Junior MasterChef at 19.

He's known for his doughnuts and sweet treats, and we love these takes on some iconic Australian favourites.

He had us at homemade Tim Tams. 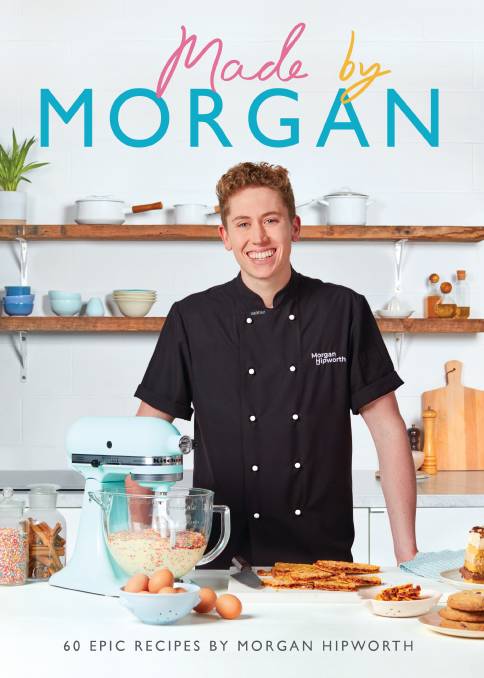 Whose favourite biscuit isn't a Tim Tam? Here is my take on this classic.

For the chocolate buttercream:

For the chocolate topping:

To make the biscuits:

1. In a bowl of a stand mixer fitted with a paddle attachment, mix the butter, brown sugar and caster sugar for three minutes, then add the eggs and mix for a further five minutes until the mixture looks smooth, pale and fluffy. Add the plain flour, cornflour, bi-carb soda and cocoa powder, and mix until just combined.

2. Press the dough out into a disc (this will make it easier to roll out later), wrap in a tea towel and refrigerate for at least one hour or ideally overnight.

3. Preheat the oven to 180C. Line a baking tray with baking paper.

4. Roll out the dough between two sheets of baking paper into a 5mm thick sheet. Remove the sheets, and cut the dough into four 8cm rectangles, and place on your baking tray. Bake for 10-12 minutes, then transfer to a wire rack and allow the biscuits to cool completely.

To make the chocolate buttercream:

To make the chocolate topping:

1. In a bowl over a double boiler, combine the chocolate and coconut oil and stir continuously until you have a smooth mixture. (Alternatively, you can melt the mixture in the microwave, stirring in 30-second intervals, until it is smooth.)

1. Pipe the buttercream filling onto a biscuit and place another biscuit on top to create a "sandwich". Over a wire rack, spoon over the chocolate topping over the top and sides and allow to set. 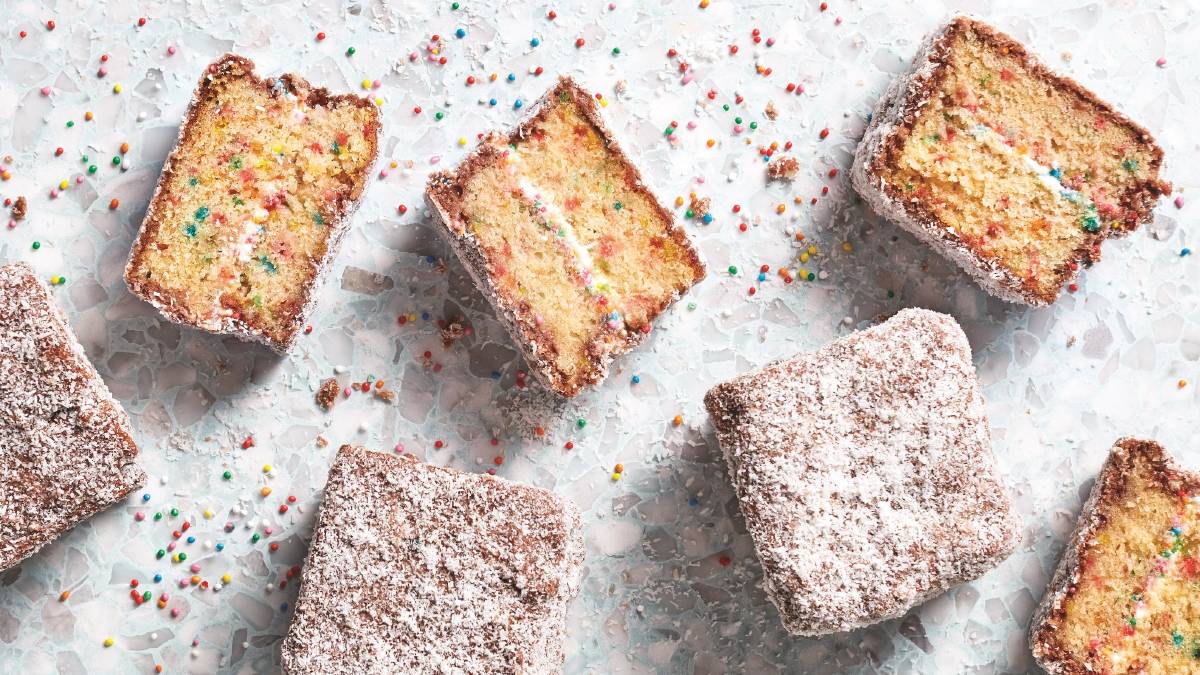 I have combined two Aussie classics: fairy bread and lamingtons. The result is a beautifully fluffy fairy-bread cake dipped in the classic chocolate icing and coconut. On the outside it looks like a regular lamington, but one bite and it says otherwise.

For the cream-cheese frosting:

For the chocolate icing:

To make the cake:

2. In the bowl of an electric mixer fitted with a paddle attachment, combine the butter, caster sugar and brown sugar, and mix for two to three minutes or until the mixture is pale and fluffy.

3. Add the eggs, and mix for two minutes on medium speed. Reduce the mixer to low speed, then pour in the buttermilk and oil, and mix until it is smooth and fluffy. Add the flour, baking powder and 100s & 1000s, and mix on low speed until just combined.

4. Pour into the prepared cake tin and bake for 25-35 minutes or until the cake springs back when you gently touch it. Allow the cake to cool completely while you move on to the next steps.

To make the cream-cheese frosting:

1. In a bowl, combine the butter and cream cheese, and mix with an electric mixer fitted with a paddle attachment until the mixture is smooth and fluffy. Add the icing sugar on low speed just to combine, then mix on high speed for two minutes.

To make the chocolate icing:

1. In a bowl, combine the icing sugar, cocoa powder, butter and boiling water, and mix with an electric mixer fitted with a paddle attachment until smooth.

1. Cut the cake into squares and then in half to separate the top and the bottom. Put the 100s and 1000s in a bowl, and the coconut in another. Spread a layer of cream-cheese frosting on half the cake squares, then top with the remaining squares to make lamingtons. Dip each lamington into the 100s and 1000s, and finally coconut, coating all sides as you go.

Tip: Cake flour has less protein than plain flour, which results in a lighter and fluffier cake. You can find it in most supermarkets, but if you can't you can substitute two tablespoons in every cup of plain flour with two tablespoons of cornflour, then sift this mixture twice. 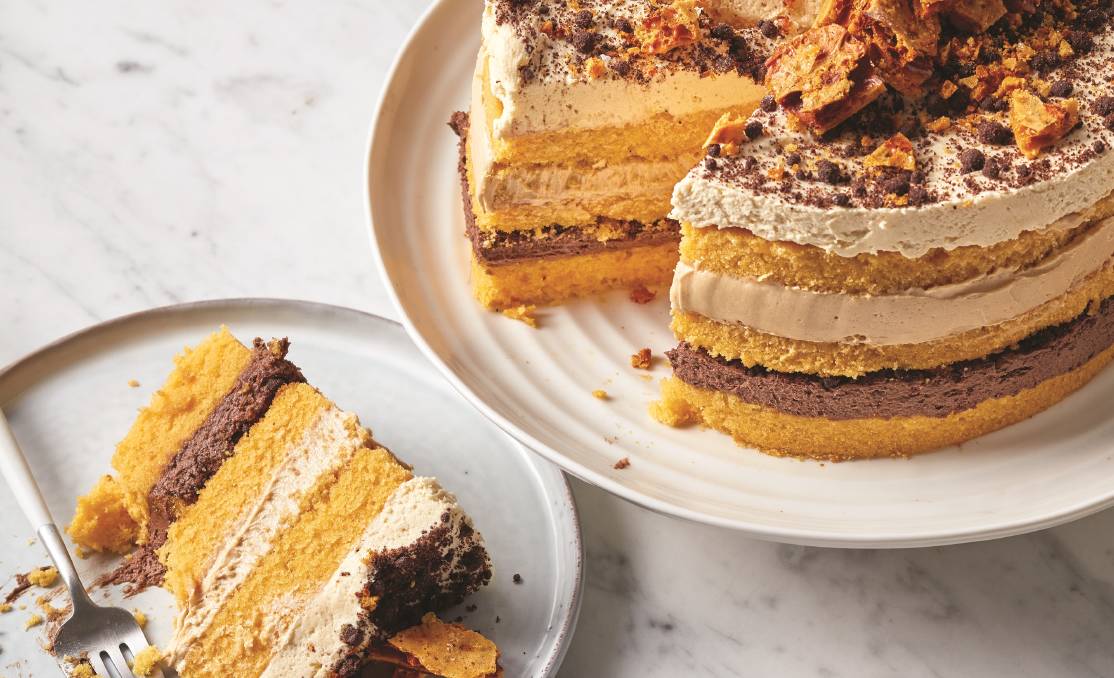 Golden Gaytime ice creams are iconically Australian, so whenever I bring this cake to a party it goes down a treat. This bad boy consists of a super-moist and fluffy caramel cake layered with a chocolate, caramel and vanilla frosting and topped with homemade honeycomb and a malted chocolate crumb. This recipe was originally inspired by Milk Bar Store's famous Birthday Cake.

For the salted caramel cake:

For the honeycomb (you can also use store-bought Violet Crumble chocolate bars if preferred):

For the malted chocolate crumb:

2 tbsp liquid glucose (if you don't have glucose on hand you can omit it; the glucose just helps to achieve a nice shiny finish to the icing)

For the caramel soak:

Special equipment to assemble the cake:

To make the salted caramel cake:

1. Preheat the oven to 180C. Grease and line a 30x20cm baking tin with butter and baking paper.

3. Pour the cake batter into the tin and bake for 30-35 minutes or until the cake is spongy and bounces back when you press it lightly. Set aside to cool completely.

To make the honeycomb:

2. In a small saucepan, combine the honey, liquid glucose, caster sugar and water. Stir with a wooden spoon over a low heat until it comes to a boil, then continue to cook, stirring, for one to two minutes or until it reaches a caramel colour. Working quickly, remove the saucepan from the heat and stir in the bi-carb soda, being careful because the mixture will foam up. Transfer the mixture to the baking tray, and set it aside to cool for at least 1 hour. Once cooled, break the honeycomb into small pieces.

To make the malted chocolate crumb:

1. Preheat the oven to 180C. Line a baking tray with baking paper.

2. In the bowl of an electric mixer fitted with a paddle attachment, combine the caster sugar, brown sugar, flour, baking powder, cocoa powder and malted milk powder, and mix on low speed for 1 minute or until the ingredients are combined. Add the grapeseed oil, and mix on low speed until combined; the mixture should now be very dry and crumbly. Transfer the mixture to the baking tray and bake for 15 minutes. Remove from the oven, and allow the crumbs to cool completely.

To make the frosting:

1. In the bowl of an electric mixer fitted with a paddle attachment, combine the butter and cream cheese, and mix on medium speed for one to two minutes or until the mixture is smooth. Mix in the icing sugar and liquid glucose (if using) on low speed just to combine, then mix on high speed for four to five minutes or until you have a stark-white, fluffy frosting. Divide the mixture evenly between three bowls. In the first bowl, use an electric mixer or a wooden spoon to mix in the cocoa powder to create a chocolate frosting. In the second bowl, mix in the salted caramel to create a caramel frosting. And in the third bowl, mix in the vanilla essence to create a vanilla frosting.

To make the caramel soak:

1. In a bowl, whisk together the milk and salted caramel until combined.

1. Carefully flip the cake out of the tin onto a clean chopping board, and peel off the baking paper. Using a 15cm springform cake tin to guide you (the ring, not the base), use a sharp knife to cut out two rounds - these are the top two layers of your cake. The remaining cake will form the bottom layer.

2. Clean the cake tin ring and place it in the centre of your serving platter (trust me, you won't want to move this cake once it's assembled), and use the strip of acetate to line the inside of the tin.

3. Using the back of a spoon, push the cake scraps inside the ring to create the bottom layer. Then, use a pastry brush to coat the cake with the caramel soak. Top with the chocolate frosting, using a spatula to spread it evenly and right to the edge of the tin, then add a generous sprinkling of the malted chocolate crumbs and honeycomb. Top with the middle layer of cake, then repeat the process with the soak, the caramel frosting and the crumbs. Finally, add the top layer of cake, brush on the soak again and spread on the vanilla frosting, ensuring this layer is perfectly smooth because it will be the main layer on show, then top with another generous sprinkling of crumb and honeycomb pieces. Carefully transfer the cake to the fridge and chill for at least two hours or up until overnight. Remove from the fridge, and remove the tin and the acetate one hour prior to serving.

1. In a saucepan over medium heat, add the caster sugar and then the water. Bring to a simmer, stirring every so often for five minutes or until the sugar has dissolved. Stop stirring and cook for a further four to five minutes or until it forms a smooth brown caramel. Take care not to burn the caramel - its colour should be amber rather than dark brown.

2. Remove the pan from the heat and stir in the butter and cream, then whisk vigorously until completely combined. Allow the mixture to cool down slightly, then sprinkle in the salt. Set aside until it cools completely before using, or cover tightly and refrigerate. 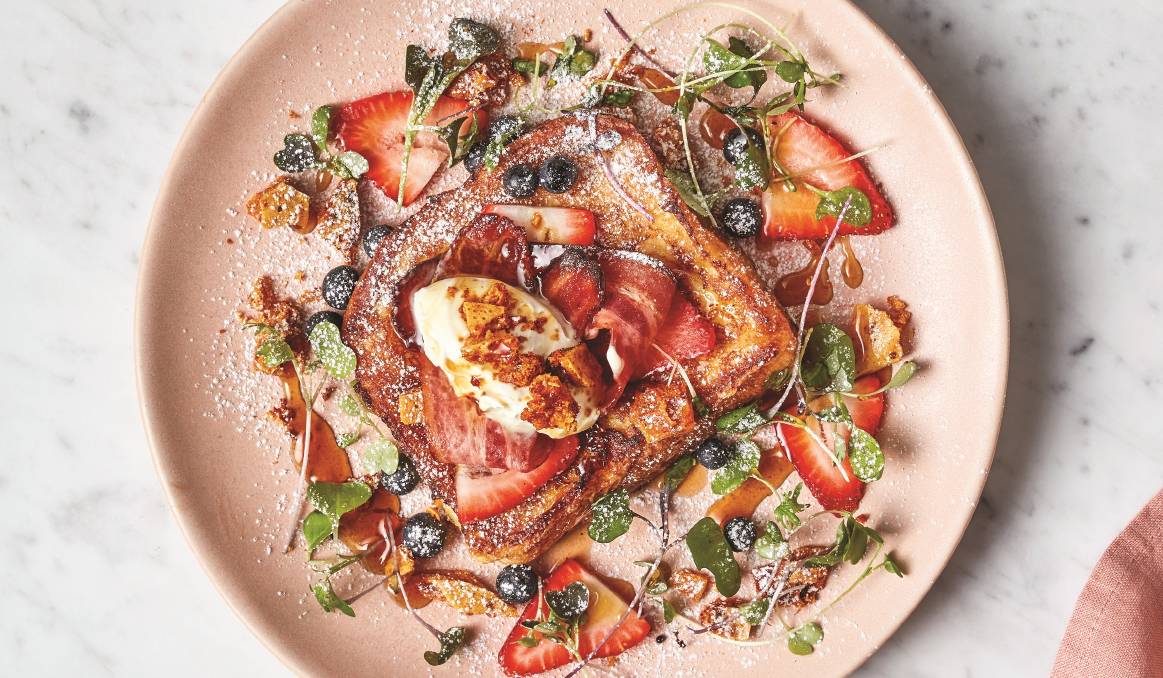 French toast always feels so decadent. It's a treat, let's be honest, so why not go all out?

3. In the bowl of an electric mixer fitted with a whisk attachment, add the cream, caster sugar and vanilla, and whip until soft peaks form. Set aside to serve.

4. In a wide, shallow bowl, add the eggs, milk, cream and cinnamon, and whisk until combined. Heat a large fry pan over medium-low heat and add the vegetable oil. Use tongs to dip the brioche slices one at a time in the egg mixture and then place in the pan. Cook for two minutes or until golden brown and then turn the bread and cook for two minutes on the other side.

5. Arrange the bread in the middle of the plate and then top with the blueberries, strawberries and maple bacon. Add a dollop of whipped cream, then sprinkle the crumbed honeycomb over the top. Garnish with watercress and then finish with a drizzle of maple syrup and a dusting of icing sugar.

This story Homemade Tim Tams anyone? first appeared on The Canberra Times.