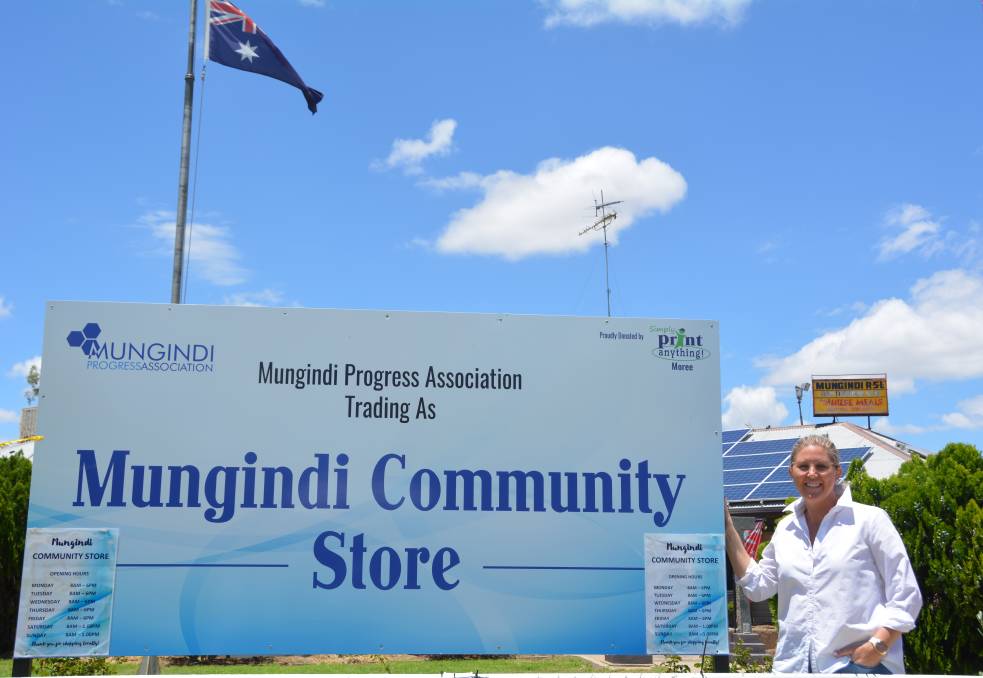 TO live in rural Australia you have to be resilient and no town in NSW better represents that quality than Mungindi.

Situated on the banks of the Barwon River on the NSW-Queensland border, the community of around 600 people has known its share of tough times in recent years.

From ongoing drought, to issues accessing vital services due to coronavirus-enforced border closures, the town stared down those challenges.

However, one of the biggest obstacles of all came on the evening of September 1, 2020 when a fire ripped through the town's main street, destroying the community's butcher shop, supermarket and haberdashery.

"I think we've always known that if something were to happen in the main street it could wipe out the whole street and at the time, it certainly seemed like that would be the case," Mrs Harrison said.

"However, we were determined to try everything and there is a Snapchat group in the community that a lot of the farmers are in, so my husband Steve put it in the group and before we knew it there were farmers, water trucks and hoses coming from everywhere.

"From there, it became about what shops we could save and there was a lot of emotion getting around, that's for sure." 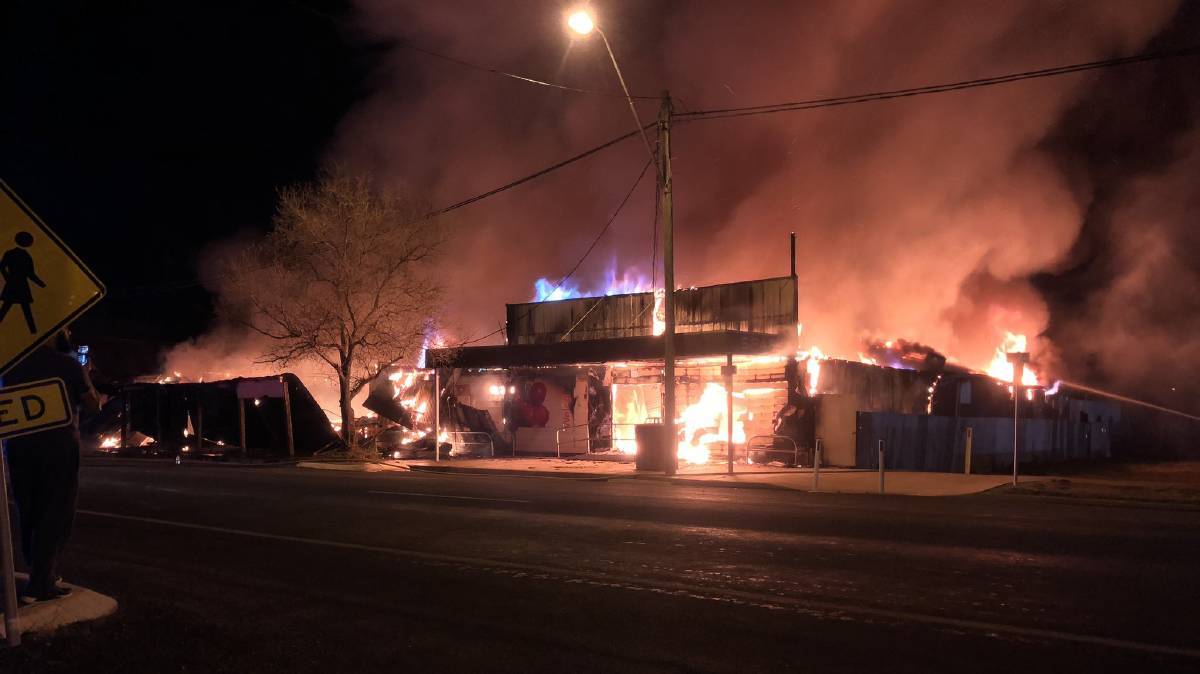 The long road back

When morning broke, the community was faced with the prospect of having to travel more than an hour for essentials, which Mrs Harrison said dampened the morale of locals.

"I think the biggest thing was after years of drought something like this happened to us and it felt like a kick in the guts," she said.

"However, we were determined not to give up and we had a meeting at the pub the night after the fire, which was chaired by Pete Prosser and he was instrumental in getting it (the community store) going.

"We're 120km away from our nearest town, which is Moree, so getting something together was vital.

"All told, it only took 10 days after the fire to get the community store going in the RSL, which was empty and the community did a lot of work getting it organised."

Since that community meeting, the store, which operates out of the seldom used RSL club, has become a meeting place and a platform for locals to learn new skills.

"Even now, we've still got lots of volunteers who come in and do different things," Mrs Harrison said.

"It's things like weeding the garden out the front to stacking the shelves after a delivery and honestly, it's got a really nice feel and we need those volunteers to be the core of what the store represents.

"We've got three school-aged students and one university student there as well, who are being upskilled, everyone who lost their job in the fire was offered a position and from that perspective I think we've done a really good job." Jack Picton, Scott Brown and Shane Taylor have been among the contributors to the success of the Mungindi Community Store, which was opened after the town's supermarket burnt down in September. Photo: Billy Jupp

As the economic and social ramifications of the town's fire began to flow through locals, the town was caught in the middle of a more global issue.

The COVID-19 pandemic had caused chaos among border communities for months and before the fire had rolled through, locals living on the NSW side of town were unable to access the local hospital because it was located in Queensland.

"It was complete madness that we weren't able to go to our own local hospital," Mrs Harrison said.

"Luckily that problem was fixed fairly quickly once the border bubbles were introduced, but still, it was a pretty bizarre set of circumstances."

While the border bubble and exemptions for travelling boarding school students had helped reunite the community, September's fire reignited fears of state lockouts due to Moree being outside the bubble at the time.

"I can't thank the council and in particular our state MP Adam Marshall enough for stepping up when they did because it took away so much stress from all of us."

Despite the town having access to essential services, many of the remaining retailers noticed a drop in trade, including the town's only pub the Jolly Swagman Hotel.

"Coronavirus hit us really hard for the simple reason that there was nothing happening here and that accounts for 60 per cent of our trade," Jolly Swagman's publican Jim Brown said.

"We were still doing takeaway meals and the locals really supported us on that front, which was good, but it wasn't the same as when travel was allowed and the other shops were open.

"The locals were fantastic through the pandemic, but it has been tough at times without people passing through."

"The river's not much too look at right now, but if it runs again soon and travel is allowed, it might get busy again," he said.

"It's green around here at the moment, but I think the drought is far from broken.

"There is hope, you wouldn't live out here if you didn't have that."

Eye to a bright future

Long-time Spar Supermarket manager across Queensland, Scott Brown, accepted the call to help run the community store and he said what he discovered upon arriving was unbelievable.

"I got out here in the first week in November and honestly it was incredible to see what the town had put together in such a short time," Mr Brown said.

"From the first day I got here I was just gob-smacked at how resilient and adaptable everyone was.

"This store isn't a Spar, but nearly all of our products are bought through them, while other stuff was donated and other stuff came from Go-Fund Me pages.

"It is really impressive to see and I'm confident it will continue to serve the community well for as long as it takes for the old supermarket to be rebuilt." 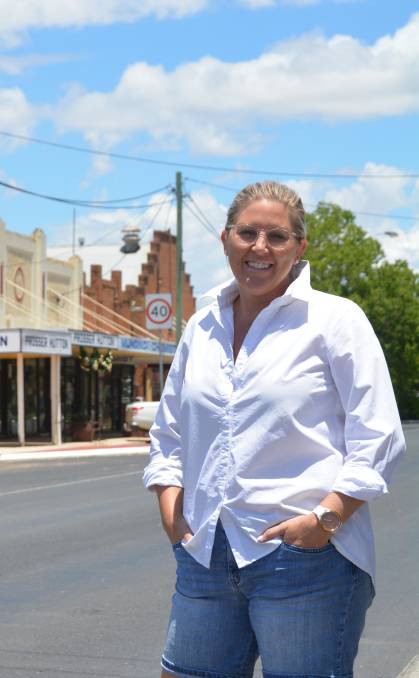 Former Mungindi Progress Association president Anna Harrison is confident the town will continue to bounce back in 2021. Photo: Billy Jupp

Mrs Harrison said she was unsure when the shops would be rebuilt because "it is all still with the different insurance companies at the moment".

"I think we all underestimated how long this process would take, but I don't think there's much we can do about it, we will just have to wait and see," she said.

"This whole thing has given me so much admiration for those towns down south that lost everything in the bushfires last summer, because while we lost so much, we still have our homes and so much to be grateful for.

"It's been really tough for us but if you look at 2020 and everything it threw at us, we are all at the other end and I couldn't be prouder of how we stuck together to get through it.

"We will rebuild this town because we are a community that would just not sit back and let it die, we have too much spirit for that."

This story first appeared on The Land.