The whole of the Moree community is invited to come together to commemorate the 181st anniversary of the Waterloo Creek massacre on Saturday, January 26.

“Anyone is welcome, it doesn’t matter what nationality you are,” Gamilaraay Invasion Day committee member, and descendent of the mob massacred at Waterloo Creek, Paul Spearim said.

For the past few years, the Moree Gamilaraay Invasion Day committee has organised a gathering to commemorate the terrible events of January 26, 1838, which saw up to 500 Gamilaraay people killed by police.

Although last year’s march and gathering was smaller than previous years, the message was still just as powerful.

This year’s event will be the fourth march, and organiser Paul Spearim said he’d love to see more people come together to share stories and remember what happened that fateful day.

“But all it takes is one person to tell a story. It’s not about numbers, it’s about getting the message out about what took place 181 years ago.

“Throughout our Gamilaraay existence and even today we have all felt and understood sadness and loss in our lives. On the 26th of January, 1838 a massacre took place at Waterloo Creek, perpetrated by and under the orders of the time of non-Gamilaraay men and people.

“This pain and suffering is still being felt today, by all our Gamilaraay families. So let’s all come together and honour all our mobs that have gone before us.

Mr Spearim emphasised that anyone in the community, indigenous and non-indigenous people, are welcome to take part in the event.

“The march/walk is open to everybody,” he said.

“We encourage everyobody, of all nationalities, to join in on the peaceful walk down the street and stand proudly together, and then have a peaceful afternoon at Jellicoe Park.

“By coming and marching you will be saying, ‘I as an non-indigenous person am proud to stand and walk to show I care and am willing to accept change for the future’.”

Mr Spearim believes that Australia’s frontier wars, including the massacre that took place at Waterloo Creek, should be commemorated each year, just as we commemorate Anzac Day and Remembrance Day.

“Every year on Anzac Day and the 11th of the 11th, we commemorate our diggers and people who fought in war,” he said.

“This was a war, it was a battle that took place on our lands and we have to respect and honour that.

“Roger Milliss wrote a book about the Waterloo, or Slaughterhouse, Creek massacre. They were given orders by the Governor General of the time to carry out this inhumane act. I will re-send letters, like I do every year, to the Attorney General and police commissioner, asking for an inquiry into what happened and calling for a commemoration place to be established for the future, so people from all walks of life can go and pay their respects.”

Mr Spearim and members of the Waterloo Creek Memorial committee are still hoping to establish a memorial plaque at the Waterloo Creek site, however plans have been halted until the exact site can be determined and the various red tape involved in the process has been cut through.

“It will be a community place that people from all walks of life can go and pay their respects.”

Everyone wishing to take part is asked to meet at Moree Court House at 10am. From there, participants will march to Jellicoe Park, where they’ll enjoy a community barbecue and peaceful afternoon sharing yarns and remembering what happened at Waterloo Creek all those years ago. 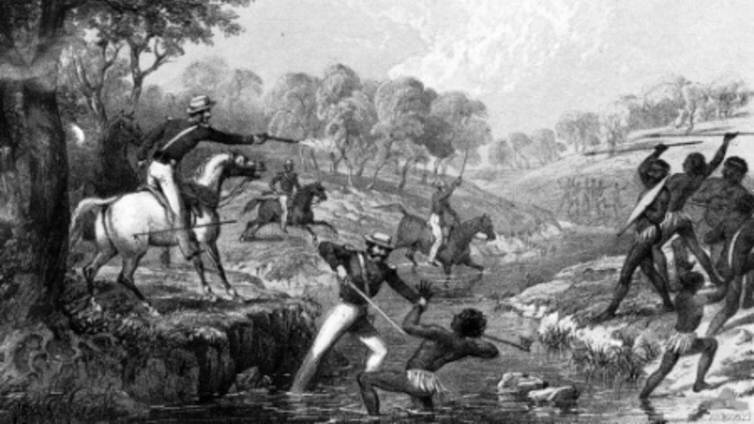 MASSACRE: This drawing, 'Mounted Police and Blacks', by Godfrey Charles Mundy depicts the killing of Aboriginal people by British troops at Slaughterhouse Creek on January 26, 1838.

One descendant of the Winagay mob killed at Slaughterhouse Creek is Paul Spearim, who has been a driving force behind establishing a memorial at Waterloo Creek.

Below is Paul's account of what happened, based on what his father, uncles and aunties (direct descendants of the mob who were massacred) told him.

Before Major James Nunn set out on his evil killing spree in my sacred Gamilaraay lands, it was under the command of the acting Lieutenant, Governor of New South Wales Colonel Kenneth Snodgrass that he gave orders to Major James Nunn, a bloodthirsty cruel officer of the crown, to purposely eradicate and 'fix the black problem' of the time.

Over several weeks as he was heading up Mount Kaputar he heard loud roars and thought it was thunder.

When he kept looking up he could see all these flickering lights and thought it was lightning and then the sky turning dark, which he thought were rain clouds.

When he and his men had reached the top of Mt Kaputar and looked out over the land he could not believe what lay before him.

The loud roar that he thought was thunder was the Gamilaraay 500 plus who were being led as always by our brave Gamilaraay women banging on their shields and possum skin drums.

He and his men could also see that the flickering lights that they thought was lightning was the many fires still burning through the night.

What he thought were rain clouds was nothing more than the 500 plus proud strong Gamilaraay warriors and our women dancing and all singing in unison the mighty fighting dance with dust flying high over their heads.

After witnessing this Major Nunn and his men took off back to Singleton.

Then several weeks had passed and our mob began thinking that this evil man was not coming back into our sacred lands.

So the Gamilaraay 500 plus had all dispersed and went back to their clan areas.

But then this evil man came back several months later with more troopers and committed genocide on our then small band of unsuspecting proud brave warriors, beautiful strong women and children and this is what is now known as Slaughterhouse Creek.